Because my mom was a sign language interpreter.
http://youtu.be/DxDsx8HfXEk
I think I have something in my eye.
Posted by Kate Davies at 6:23 AM No comments:

Email ThisBlogThis!Share to TwitterShare to FacebookShare to Pinterest
Labels: Video of the Week There's a thin line between blood and madness.
Children of Night, Book 5
Early Twelfth Century. When the half-civilized Conrad Quintano stumbles upon a stacked battle on an isolated beach, his first instinct is to walk away. What does he care if a bunch of worthless vampires kill each other? But a dying ember of chivalry compels him to rescue the pretty female vampire in distress—radically altering the course of his already cursed life.
Present Day. Marc Fischer continues his desperate search for Elise, while his newly single twin sister, Julie, is hooking up with everything that moves—at least that's how it looks to a jealous Armand. As the twins' unusual abilities grow stronger, Marc makes the mistake of trying to protect Julie from what he's learned about their true nature.
Meanwhile, Conrad's relationship with Georgia—the vampire he saved centuries ago—is about to alter yet again. They've each been keeping dangerous secrets. Secrets with the power to destroy the entire clan. Now, with Julie's life threatened, the Fischer-Quintano vampires will learn the most painful truth of all. No lie lies hidden forever.
Product Warnings
Proceed with caution. Storm warnings and small craft advisory are in effect as romantic alliances form and re-form at random. Expect to encounter any or all of the following: old hippies, new friends, erroneous conclusions prematurely jumped to, and best-laid plans gone seriously awry—thanks in no small part to the actions of a certain impetuous Spaniard.
Can't wait to run out and Buy It Now!
Posted by Kate Davies at 6:16 AM No comments:

Book BIN Tuesday - Loving Maddie From A to Z

Award-winning photojournalist Zack Donovan is happy to be alive after being held captive by a band of rebels in Syria. He's not so happy to be on his way back to Chicago to recuperate with his college friends Maddie and Aidan, who are now a couple. The fear while being held prisoner was nothing compared to how he feels about facing the two people who unknowingly broke his heart seven years ago.

Maddie and Aidan are deeply in love, but lately they feel something is missing for them. They'd do anything to make the other happy, but are struggling to figure out what that is. Those problems are set aside, however, when their best friend from college is taken hostage in Syria. After graduation, Maddie and Aidan were hurt by Zack's refusal to ever come home to visit, but he's still their friend and he has no family, so when he's finally free they insist he come stay with them to recover.

Zack's a different man now. He's seen terrible things. He's come to terms with his sexuality and embraced his need to dominate. Maddie and Aidan would be shocked to know the kinds of things he likes to do. A guy like him will never have a relationship like theirs. But when Zack realizes he might be able to show Maddie and Aidan what they're missing, he faces a dilemma. Do something? Do nothing? Pretend everything's fine? Help them if he can? But will showing them what they're missing help save their relationship...or destroy it?

Rowr! Sounds amazing. Can't wait to run out and Buy It Now!

Samhain! Time travel! A Druid priest! And my favorite spot in Scotland, the Isle of Iona. This book was SO much fun to write, even if it is a bit of a departure from my usual fare. 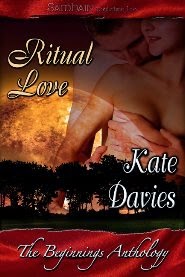 Scientist Moira Sinclair doesn’t believe in magic. Or at least she hasn’t since childhood. She’s only come to Iona in remembrance of her long-deceased grandmother, the last person who encouraged her fanciful side. But now she’s stumbled onto a secret druid ritual—and into another time.

Aedan Ap Crannog is furious to discover an outsider spying on their sacred, banned Samhain rites. With her strange garb and stranger mannerisms, Moira is unlike any woman he’s ever known. But she could cause trouble for him and the people who follow him in the ancient ways. To prevent her from sounding the alarm, he takes her captive, hiding her in the labyrinth of caves along the far shore.

Despite their differences, sparks burn between them as brightly as the Samhain bonfire. Now captive and captor must find a way to bridge the centuries before the magic disappears with the dawn…

The hammer scene. Because I love it so. :)