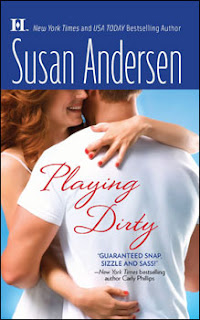 I'm a huge fan of her work, and a new book is reason to celebrate. Especially when it sounds as good as this one!

*****
When high school golden boy Cade Gallari publicly revealed he’d slept with “fat girl” Ava Spencer to win a bet, he broke her heart. Now a decade older and a head-turner with her own concierge business, Ava isn’t the gullible dreamer she once was—and she plans to prove it when Cade, hotter than ever, breezes back into town with an offer she can’t refuse.

A documentary film producer, Cade is shooting a movie about the mysterious mansion Ava inherited. And he wants her as his personal concierge. She’s certainly professional enough to be at his beck and call without giving him everything he wants. Like another shot at having her in his bed. But Ava doesn’t count on Cade’s determination. Because he’s never gotten over her. And he’s not above playing dirty to score a second chance at a red-hot future…

Doesn't that sound fabulous? So why not pick up a copy and Buy It Now?
Posted by Kate Davies at 11:53 PM 2 comments:

Monday Movie Musings - So Many Movies, So Little Time!

Like many parents, I've fallen out of the habit of seeing films in the theater. The cost of tickets, added to babysitting costs and assorted sundry expenses, not to mention the time involved, made it more alluring to wait for the video or cable release and watch movies then. Some films, though, don't translate well to the small screen. And, of course, as my kids have gotten older, they've wanted to go to the movies instead of watching them at home.

So I'm looking at the movies that are in theaters now and making a list of films I want to see in their bigger than life incarnations.

1. Harry Potter, 7.2. This is a no-brainer, especially since FutureStar and Midkid have been chomping at the bit to see it, too. We'll probably go this week (though I'll never fully win them back after missing the midnight showing for the LAST HARRY POTTER MOVIE EVER.)

2. Cars 2. Not one I'm dying to see on the big screen, but GPS is, so to keep the movie-going-with-kids in balance, we'll be heading out to the multiplex for this one as well.

5. Lefty Loosey, Righty Tighty. Okay, this one's a wish list movie, since it hasn't been released yet (it hasn't even hit the festival circuit!), but I'd love to see this one on the big screen.

How about you? What movies are you looking forward to, or have enjoyed already this summer? And do you prefer seeing films in the theater, or in the comfort of your own home?
Posted by Kate Davies at 12:06 AM 2 comments:

It's been a month since I last blogged?

Oh, of course. That was the end of the school year. Makes perfect sense now.

1. Spent time with the family (all home for the summer);
2. Gone on vacation across the state;
3. Traveled to Oklahoma City for a day-job-related conference;
4. Read some great books;
5. Taken up golf (with the hubs);
6. Written!

...and there's more where that came from, with a camping trip and various day excursions planned for the rest of the summer. But I'm adding blogging back in, both because I've missed it and because I've got some exciting stuff coming up.

Including a new interview that's in the works! I think you'll be as excited as I am once you see who I get to chat with next. :)

Stop by tomorrow for a new Inspiration Friday post, and next week I'll be sharing some of my summer vacation pics, including one with me standing next to a giant metal chicken.