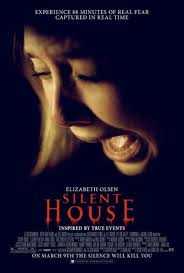 Let me state upfront that I am not a fan of horror movies. When I have a rare opportunity to go to a movie in the theater and need to choose a genre to see, horror would pretty much be at the bottom of the list.

And yet I saw Silent House the first week it was released.

(I blame Eric Sheffer Stevens. And Maia Strong, who made me go see it with her.)


(Okay, maybe I dragged Maia to the movie so I wouldn't have to go alone.)

I've been tracking the film since it was in pre-production, as soon as ESS was cast. The single-shot technique intrigued me, and it was fascinating to listen to Eric talk about how filming it was different from other film experiences. But it was HORROR. Sob.

So I settled into my seat at the theater with more than a little trepidation. I was fully prepared to fling myself under the chair if necessary.

But you know what? I actually liked it.

(Unlike a lot of horror aficionados, apparently. So maybe I'm more its target audience than they are!) 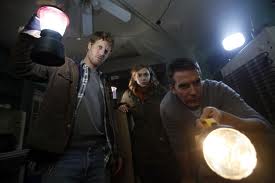 I loved the one-shot technique, even though from time to time it caught my attention to the detriment of the actual scene (how the heck did they light that shot? Where's the cameraman hiding in this one?). I loved Eric's portrayal of the somewhat creepy uncle (though I fully acknowledge I am incapable of being objective when it comes to him. The man could read the phone book and I'd be utterly engrossed). I thought Elizabeth Olsen did a great job carrying the vast majority of the film on her shoulders. And I enjoyed puzzling out the clues throughout the film.

Was it perfect? Heck, no. And I can see why a horror fan might feel betrayed by the twist ending. But as a psychological suspense film, it really worked for me. So if you're looking for something a little different in that genre, you might want to give it a shot.
Posted by Kate Davies at 10:32 PM No comments:

Book BIN Tuesday - Everything You've Got by Erin Nicholas

Erin Nicholas has a new book out, and it's a scorcher! 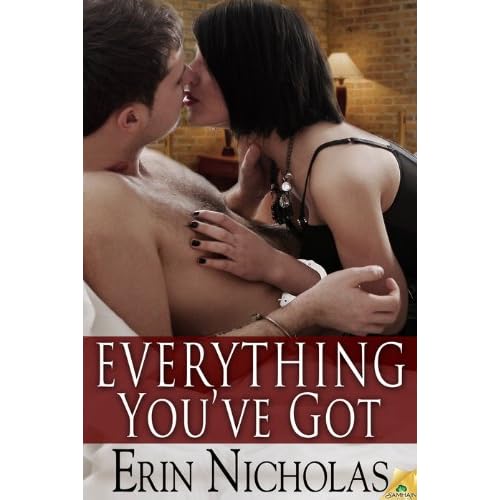 A girl, a guy, a set of handcuffs… What more could happily ever after possibly need?

Luke Hamilton’s requirements for the perfect woman are straightforward: live, work and play in his beloved hometown—and get along with his mother. Dr. Kat Dayton’s got it all. And Luke’s noticed. It’s obvious to him that his long-time friend belongs with him, especially after the world-rocking kiss she lays on him at his birthday party.

Kat would love to let Luke in, but if he discovers the truth—that committee meetings bore her to tears and she’d rather have a root-canal than go to another potluck—his white-picket-fence dreams will be crushed.

Being stuck in an RV with Luke should be three days of flirtatious fun, but for Kat it’s heavenly hell. The close confines and good old-fashioned lust are making a mockery of her perfect-woman façade, and if he finds out about the mistake that might cost her job—and force her to leave town for good—it’ll take more than a sexy pair of handcuffs to keep him close.

Warning: Contains a man who's willing to do anything for the perfect woman, an RV and surprise road-trip to help him prove it, and a woman who's wondering just what the hell she's gotten into.

Late last year, I got a new day job, which I love. But in the process, I also stopped walking every day, which had been part of my routine for almost nine months. I was working full time, with a major commute, and I wasn't always around when my husband/walking partner was able to get his walk in. 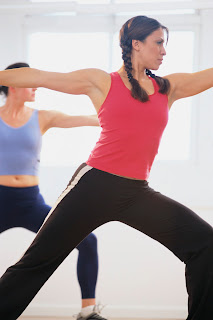 Then there was the office situation. Until I took this job, I worked from home, so it wasn't quite as hard avoiding unhealthy treats - I just didn't buy them! Unfortunately, my new office mates were quite generous with their candy bowls and homemade snacks.

The combination managed to undo the hard work I'd done last year. Since March, I'd lost almost twenty pounds. As of last week, I've gained almost all of it back.

So I jumped at the chance to become a team leader for Lucy Monroe's Fitness Challenge. There are some great prizes, of course, but more important to me was the opportunity to be more accountable for healthy living. And I just know my team is going to kick butt. :)

So why not join in? Head on over to Lucy's page and sign up, and on April 1 we can start cheering each other on in our weight loss/healthy lifestyle pursuits.

Tonight marks the return of I Hate My Teenage Daughter to the FOX lineup. Sandwiched between Raising Hope and New Girl, it'll be part of the new Tuesday comedy block. So why should you add it to your viewing schedule tonight?

1. Eric Sheffer Stevens.
2. A fantastic ensemble cast that obviously enjoys working together.
3. Guest star Mark Consuelos.
4. Eric Sheffer Stevens.
5. A mention of telenovelas!
6. The cast members who tweet are really nice (and interact with fans).
7. Eric Sheffer Stevens and Kevin Rahm are goofy.
8. If you attend a filming, you'll get pizza.
9. It's only half an hour of your day. You can spare that, can't you?
10. ERIC SHEFFER STEVENS.

Six Sentence Sunday - Take A Chance On Me

Today's selection is from my January print release, Take A Chance On Me.

Tom nodded. “It’s cold, but it’s not that cold.” He reached out and pulled her coat collar closer together, tucking the fringes of her scarf around her neck to block out the wind.


She stilled, her eyes darkening as she stared at him. Tom’s grip tightened on her coat, his fingers clutching the fabric. Slowly, deliberately, he lowered his head to hers.

*You can find more Six Sentence Sunday authors here.
Posted by Kate Davies at 2:00 AM 1 comment: