Today, TWO of my fellow Naughties have books out! First up is Kelly Jamieson's NO OBLIGATION REQUIRED:


To err is human, to forgive is against his policy. 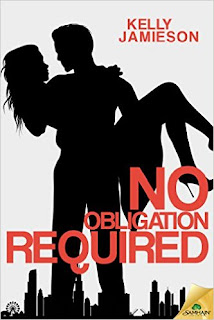 Bailey Harris is eager to move up at Huxworth Packard. Her mentor advises her to network more after hours. But that means she’ll have to reveal the reason she rushes out of the office at five o’clock on the dot--and it’s not for happy hour Cosmos.

On the other hand, more office time means more opportunities to feast her eyes on the firm’s executive creative director, the gorgeous, brilliant Mason Ward.

Mason sure has noticed the sweet, sexy media girl, but with a past that left his heart an echo chamber, his focus is on work. The occasional itch he scratches with meaningless, emotionless hook-ups.
Though he’s determined to keep his hands off Bailey, he can’t resist when she makes it very clear she wants his hands on.

They’re on the same sexy page about their relationship--Bailey doesn’t have the time, and Mason doesn’t have the heart. But when meaningless sex suddenly becomes very meaningful, they find themselves in dangerous emotional waters.

Warning: This book contains a girl with a mad crush, a mad man with a mysterious past, secrets, lies, and shoes.

Plus Meg Benjamin's Love in the Morning: 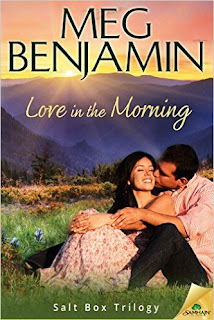 The reality show Lovely Ladies of L.A. should have launched Lizzy Apodaca's catering company into solvency. Instead, when her carefully prepared appetizers mysteriously gave the cast on-camera food poisoning, she lost everything.

To make matters worse, her car breaks down in Salt Box, Colorado, a town not much bigger than a salt shaker. But maybe her luck is changing—the handsome owner of Praeger House, the town's premier hotel, needs a kitchen assistant.

Clark Denham realizes his diamond in the rough is a polished gem when Lizzy steps up to save the hotel's breakfast buffet after his temperamental head chef quits. It isn't long before she's winning his heart as smoothly and efficiently as she runs his kitchen.

Their relationship goes from simmer to rolling boil with the speed of a short order cook. But when a bevy of not-so-lovely ladies shows up in Salt Box, Lizzy's past disaster threatens to flatten her happily ever after faster than a falling soufflé.

How could you resist either one? So why not run on out and Buy (Them) Now?

No Obligation Required
Love in the Morning
Posted by Kate Davies at 12:39 PM