I had a great time at the conference. One of my closest friends moved last year to the town where the conference was held, so I got to spend a lot of time with her. And we even had a babysitter for two of the nights so I could join my hubby at evening events.

My TT this week is a bit random, thanks to Becka Goings' tag. I'm supposed to list eight things about me, and tag eight people. Well, I've already done this meme within the last couple of months, so there isn't much to tell, and I think I've already tagged everyone I know (and a few I don't).

So, instead, I'm doing thirteen things about me and/or my trip, and tagging anyone who stops by today who wants to be tagged. Hope that works!

1. One of the things we usually love about this conference is the nice weather. It's on the other side of the state, and tends to be really warm and sunny. This year, the weather, to put it politely, SUCKED. Windy, cold, cloudy, bleah.
2. We have a portable DVD player, but I never got around to setting it up, even though the trip usually takes about six hours each way. And the kids survived.
3. I refused the dessert menu at the big district dinner this year. Last year, I ordered a yummy-sounding dessert, only to discover it was a foot-tall tube of pastry filled with cream. STANDING UP. Aspiring romance writer with a phallic-looking pastry? The jokes never ended.
4. I write under a pen name, and only one person in the entire district knows I'm actually published. The rest think I'm still trying to break in to the traditional/sweet romance market. I'm starting to really hate the question, "So how's the writing coming along?"
5. I really don't mind hanging with the kids while the hubby is at sessions or luncheons. We walk downtown, play at the park, enjoy the pool (well, most years).
6. I'm also looking forward to RWA next year, when that situation will be reversed. :)
7. On long car trips, I hardly ever drive. My DH loves to drive, so I'll only take over if he's really tired. That's more than okay with me.
8. Now, more random facts: In high school, my nickname was Bob. After Senator Robert M. "Fighting Bob" LaFollette.
9. I once attended Westercon dressed as Crissy Kochanski, Dave Lister's love interest from Red Dwarf.
10. I'm currently re-reading Suz Brockmann's Troubleshooters series in preparation for her newest release this summer. She's one of the few authors I'll auto-buy in hardcover the first week of release.
11. Harry Potter 7 is another first week hardcover for me.
12. A very good friend of mine has made it to round four of Samhain's Best First Line contest. I've read the whole book and it rocks. Fingers and toes are crossed for ya, babe!

13. My kids can, while listening to the radio, identify the Beatles, the Stones, blues music, and "The greatest scream in rock and roll history" (The Who, Won't Get Fooled Again) Sadly, none of that is due to my influence. :)

Okay, done. Consider yourself tagged, if you so desire.

.. for a few days. Hubby's going to a conference and the kidlets and I are tagging along. And since the hotel doesn't have wi-fi ($5 for fifteen minutes of Internet access? In the lobby? On the single shared computer? Uh, sorry. No.)

Have a great weekend, and I'll be back sometime mid-week!
Posted by Kate Davies at 12:10 AM 2 comments:

Email ThisBlogThis!Share to TwitterShare to FacebookShare to Pinterest
Labels: life

THIRTEEN THINGS I LOVE ABOUT SUMMER

In honor of the first day of summer here in the northern hemisphere, here are my thirteen favorite things about the season:

1. Bruschetta. Yeah, I know, I'm a bit obsessive about it this week. Here's a pic of my actual dinner, not borrowed from Google Image Search: 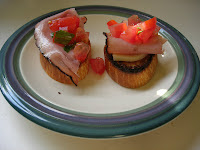 2. Sprinklers. Kids played in the spray this evening for almost an hour.

3. Leaving the windows open at night.

6. The scent of ripe blackberries. (Okay, that's actually later in the summer, but I still love it.)

7. The extra hours of sunlight.

8. Boating. We don't actually have a boat, but sometimes our friends take pity on us and take us out on the water.

11. Sitting on the front porch, watching the kids play with the neighbors late into the evening.

What's your favorite thing about summer? Or, if you're down south, what's the best thing about winter?

I made my fave summer dish tonight for dinner, and was reminded just how much I love it. I first made bruschetta a few years back for a family pot luck, and was hooked. Funny thing is, I'm not a huge tomato fan, unless they're cooked in an italian sauce. But for bruschetta, I'll make an exception.

There are probably as many variations of bruschetta as there are cooks, but here's my personal favorite:

*handful of basil leaves, chopped (no, you can't use dried. Sorry.)

Mix together and put in fridge.

Slice fresh mozzarella; cut deli slices of ham in half.

Take one loaf pain francais or Italian bread. Slice in rounds. Brush with olive oil and broil in oven until golden brown.

Then pile ham, cheese, and tomato mix on the toasted bread. Eat. Enjoy.

Seriously. Give it a try. I bet you'll be hooked, too.

So what's your favorite summer dish?
Posted by Kate Davies at 12:13 AM 3 comments:

Today's the last day of school and the week has been crazy. I'll be back next week with a new installment. In the meantime, I do have an announcement -- my new book has been named!

On September 4, LESSONS IN LOVE will be available from Samhain Publishing.

And the lucky person who came up with the title? Erm, my husband. :)

However, SANDY was closest with European Lessons In Love, so if you're reading this, Sandy, please contact me at kate AT kate-davies DOT com to take care of your prize details.

And thanks, everyone, for all the suggestions! I had a great time reading all the titles, and even came up with some new story ideas for them.

Have a great day,
Kate
Posted by Kate Davies at 8:53 AM 4 comments:

Book BIN Tuesday -- Taking it to the Edge

Yes, I’ve done it again.
I’ve glommed a series.
And you should, too.
I just picked up Cherry Adair’s EDGE series a couple of weeks ago, and was immediately hooked. It’s a great trilogy about three brothers who work for the paranormal section of T-FLAC, an anti-terrorist organization. They’re also bound by a 500 year old family curse that dooms the women they love to death.
Suffice to say they’re edge-of-your-seat reads. Add in the explosive sexual tension, the beat-the-clock race to stop terrorists, and the great dialogue, and these three books are definitely ones you should Buy (Them) Now.
Posted by Kate Davies at 12:49 AM No comments:

Today's the last day to enter my Title Contest! (See post directly below this one.) Haven't entered yet? Here are thirteen reasons you really, really should!

1. Fame! If your title suggestion is selected, you'll get your name in the acknowledgements.

3. A chance to participate in the creative process! :)

5. Ditto on the back cover blurb.

7. Once on the website, that means it has an official release date. Whee!

8. One less thing for my editor to stress about.

9. One less thing for me to stress about.

10. With a title for this book, naming the next book should be a breeze!

11. You could see your title idea in a bookstore near you!

12. By reading the info in the contest post, you'll get a sneak peek at the storyline.

Okay, you title gods and goddesses. I need your help again. The Novel Formerly Known as Counterfeit Nanny needs a new name, and pronto. See, I can't send in my art form without the correct title. Or my back cover blurb. Or pretty much anything else.

So here's the deal. I'll give you a brief rundown of the story. Suggestions will be accepted until Thursday, 9 pm, PDT. (West coast USA.) Or until someone posts something I lurve so much I have to snatch it up right away.

No guarantees I'll pick a winner, since I've got family and friends on the case as well. But if I do, you'll get your name on the acknowledgements page, as well as a free download of the book. Fair enough?

Now, onto the actual storyline:

Alex du Charbonneaux is tired of being the subject of intense media scrutiny. He's even more annoyed with the social climbing women who will do anything to anything to get close to him -- even pretend an interest in his five year old daughter. So if he fudged the details of the job to protect his child--and his privacy--who could blame him?

But nanny to a princess is a far cry from the teaching position Brynn expected. She never expected to fall for her charge's father, either--the crown prince of Laurivenia. Passion burns between the two of them, but he's determined to keep his private life private. So when the paparazzi discover their affair, all bets are off. Can the prince and the nanny find common ground--and learn to trust in love?

****
Okay, there you go. Have at it! Post any and all title suggestions--though if you have more than one, try to post them all together (or in blocks), rather than one per comment. Thanks!