Some days, things just fall into place. (With three kids, that happens far less than I'd like it to, particularly when talking about their toys, but ah well...)

Today was one of those days.

It was a balmy, sunshiny day, with just enough of a breeze to keep it comfortable inside and out. My kids all had great days at school. A check I'd been waiting on finally showed up in the mail. We took the kids out to dinner, and they actually behaved. :)

Plus, I got within a paragraph or two of finishing an article (before deadline!), figured out what was blocking me on the novella, rewrote a scene that just hadn't been working, and updated my blog.

After last week (characterized by phlegm, phlegm, and more phlegm) it was nice to have a day go right.

How about you? Was your Monday good, bad or indifferent? And what's on tap for the rest of the week?
Posted by Kate Davies at 11:57 PM 2 comments:

A Movie I Think Everyone Should See...

I was intrigued by Akeelah and the Bee when I first heard about it. But with three kids, I knew I'd have to wait for it to be released on video before I'd get the chance to see it. (DH and I get to see movies in the theater approximately once a year, when we're on a kid-free vacation. And we usually choose "gotta see them on the big screen" adventures and CGI-heavy pics, instead of heartwarming family dramas.)

This weekend, though, DH picked Akeelah and the Bee up at the local video store for our older two to watch. The eight year old had heard of the movie and was excited to see it; the five year old wanted to know if there would be popcorn. :) So Sunday afternoon, we sat down to watch.

I loved, loved, loved this movie! The acting was superb, the characterization engaging, the story exciting, and the love of words and learning was palpable in every frame. What an empowering message! My eight year old cried, laughed, and asked if we could buy it. My five year old wanted to know what happened to the popcorn.

And I started telling everyone I knew that they had to see this film.

So my question to you is: have you ever been so excited about a film, TV show or book that you became an unpaid promotions director for it? If so, what film/show/book? Help me add some new titles to my must see/read list!
Posted by Kate Davies at 12:40 AM No comments: 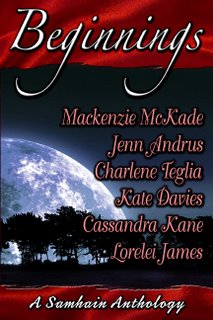 I promised to post the cover of the Beginnings anthology a few days ago, so here it is. Doncha just lurve it? :)

Although Ritual Love (and, by extension, the Beginnings anthology) isn't my next release, so much has happened with it lately it's at the forefront of my mind. New cover art, getting the okay on the last edits, its own page on the Samhain site...

To celebrate, I updated my website to include an excerpt from Ritual Love. To take a peek, look here.

Labor Day weekend in my family is reserved for one last end-of-summer hurrah, a huge get together at the rodeo. We wear cowboy hats and scarf down bbq beef sandwiches and have a pizza party on Saturday night. We wander the fair and buy t-shirts and eat hot scones slathered with jam.

In any case, this Labor Day was no exception. I just downloaded my photos of the rodeo and thought I'd share a couple with you. 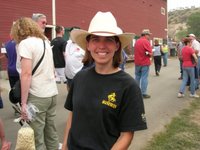 <=Here I am, decked out in my rodeo finery. I love wearing my real-honest-to-goodness Stetson, but rarely have an excuse to pull it out of the closet. Nothing keeps it off my head at rodeo time. 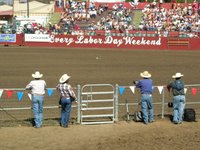 Our seats are right across the track from the rodeo arena. It's a great location. The professional photographers hang out there, too. => 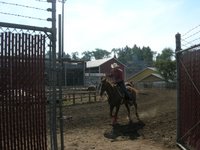 <=This one's a little dark, but I like it anyway. A cowboy and his horse warming up behind the arena. And the last pic I have to share:

an action shot! Still photos (at least with my dinky camera) can't do the energy of the rodeo justice, but I do my best. Note the pink shirts on the riders -- it was Man Enough to Wear Pink day, in honor of breast cancer survivors. These guys definitely were. :)
Posted by Kate Davies at 9:56 PM 3 comments:

Beginnings: A Samhain Anthology, that is!

(Note: I originally included the cover art for the print anthology here. It has now disappeared, and I can't seem to upload the file again. Rather than fight blogger until the wee hours, I'll try tomorrow. Sorry!)

The six stories in the anthology are all tied to Samhain, the ancient Celtic precursor to Halloween. Each story will be available online as an individual e-book on November 1 (or, as my editor reminded me, late October 31st, since Samhain usually releases the books the night before the official date). Then, shortly thereafter, the anthology will be available in print.

And the individual covers are just as cool as the print cover. Scott Carpenter (have I mentioned how much I LURVE his work?) took the print cover as a background and added an embracing couple for each story. Here's mine:

Isn't it great? I swear, getting a cover file e-mail in my inbox is like Christmas, birthday, and graduation all in one. I get all giddy when it's time to open the file. :)

Curious about the book? Here's a short description:

On a night of forbidden rituals, the veil between past and present lifts—and their worlds will never be the same.

Scientist Moira Sinclair doesn't believe in magic. Or at least she hasn't since childhood. She's only come to Iona in remembrance of her long-deceased grandmother—the last person who encouraged her fanciful side. But now she's stumbled onto a secret druid ritual—and into another time.

Aedan Ap Crannog is furious to discover an outsider spying on their sacred, banned Samhain rites. With her strange garb and stranger mannerisms, Moira is unlike any woman he's ever known. But she could cause trouble for him and the people who follow him in the ancient ways. To prevent her from sounding the alarm, he takes her captive, hiding her in the labyrinth of caves along the far shore.

Despite their differences, sparks burn between them as brightly as the Samhain bonfire. Now captive and captor must find a way to bridge the centuries before the magic disappears with the dawn...

The other five stories sound great, too -- I can't wait to read them! If you're curious, here are links to the other authors...

Happy reading, everyone!
Posted by Kate Davies at 12:46 AM No comments: