Book BIN Tuesday - Love After All 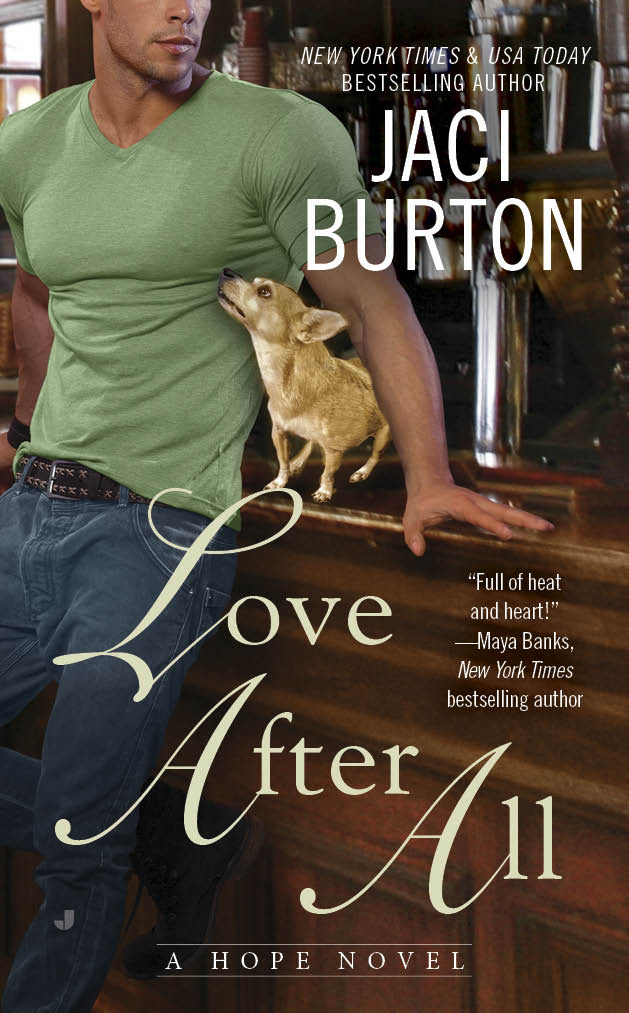 In the latest novel from the New York Times bestselling author of Hope Burns, a woman discovers that the man she least expects is exactly what she needs…

High school math teacher Chelsea Gardner has the perfect plan. She’s tired of dating all the wrong men, and after years of frustration, she’s developed a foolproof list of requirements for finding “The One”.

Bar owner Sebastian “Bash” Palmer finds Chelsea beautiful, smart and fun, but he thinks her list is ridiculous and unnecessary. Intent on proving Chelsea is looking for love in all the wrong ways, he offers to help her find the “perfect” man.

Chelsea knows Bash isn’t the right guy for her—he barely meets one of her criteria—but there’s something about the charismatic man that has her yearning for things that are most definitely not list approved.

Because sometimes, a relationship that looks totally wrong on paper can turn out incredibly right…

Teacher heroine? I'm in. Heading out as we speak to go Buy It Now! 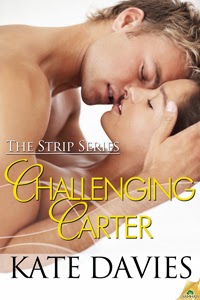 The featured book this week is Challenging Carter, the final book in my Strip trilogy!

When the stakes are high, she's ready to shed more than her inhibitions-but will the man of her dreams rise to the challenge?

Dani's been in love with Carter forever. But she's nothing like the women he dates-glamorous, exciting, spotlight-ready. Instead, she's stuck in the 'best friend' role and can't seem to find a way out of it. Until a scheduling mix-up finds her enrolled in a strip aerobics class. Now this buttoned-down wallflower is finding her wicked side-and liking it!

What in the world happened to Carter's best bud? She's gone from sweet to sexy in ten seconds flat-and Carter's lucky enough to be around for the ride of a lifetime. But he knows from past experience that relationships don't last. He's got to get things back on track before the most important friendship in his life is damaged forever.

Problem is, Dani has no intention of going back to being "just friends". It's about time someone challenged Carter's assumptions about love and friendship-and Dani's just the woman to do it!

Monday's Crush, Christopher Sean, is currently on two shows - Hawaii Five-0 and Days of our Lives. Just to give you an idea of his range, here's some work from both of them:


Hawaii Five-0 - CS plays Gabriel Waincroft, Chin's brother in law and all around bad guy. (Warning: pretty brutal scene in the middle of this one.)
Posted by Kate Davies at 6:00 AM No comments: 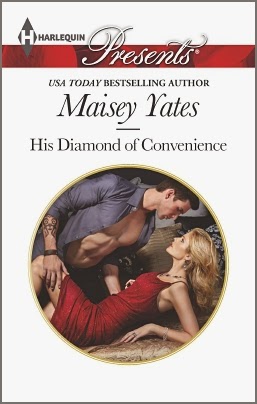 Twelve years ago, Victoria Calder made a mistake that cost her father his business. Now she finally has a chance to atone. And if that means going toe-to-toe with the arresting Dmitri Markin she's prepared to step into the ring…and put his on her finger!

Dmitri—former martial arts fighter, present-day pleasure seeker—is a man who likes to win. The beautiful Ms. Calder might have initially shocked him with her proposition, but there's more than one advantage to the deal she's proposing… If this dedicated bachelor is going to surrender to marriage it certainly won't be in name only!

I'm a huge Maisey Yates fan, and this book sounds like quintessential, fantastic Presents. Plus - TATTOO. Gonna run on out and Buy It Now!

Strip Tease was my second book published, but it sold the same day as Taking the Cake - Angela James sent me an offer on both of them at the same time. It would be an understatement to say that it was an exciting day for me! Both TtC and ST are set in Seattle, with overlapping characters (also including Challenging Carter's heroine), and were a blast to write. 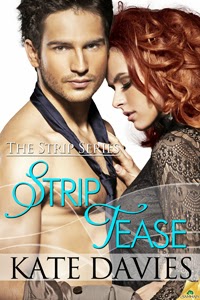 He’s vice. She’s nice. This potent mix has to be handled with care...

It seemed easy enough. Hit the local all-male strip club, pick a likely target and hire him for her best friend’s bachelorette party. But the stripper who catches Caroline’s eye has a different agenda. He’s an undercover cop, and Caroline ends up under arrest—for solicitation!

Tony DiMarco realizes too late that he’s made a mistake. Caroline’s reputation and business are suffering, and he feels responsible. He feels something else too—the pull of red-hot desire. He wants Caroline, but she’s afraid that he’s just trying to make up for his mistake. Can this determined vice cop teach her to trust him?

Video of the Week - ESS Showreel!

Want to know why I'm such a big fan of Eric Sheffer Stevens? Here's a quick peek - sort of a greatest hits of his work for the past few years. (And, amazingly, nothing from As The World Turns, which is what put him on the radar for many of his fans!)

So there you go. Enjoy!
Posted by Kate Davies at 6:00 AM No comments:

PG Forte has a new book out today! And it sounds gooooood.... 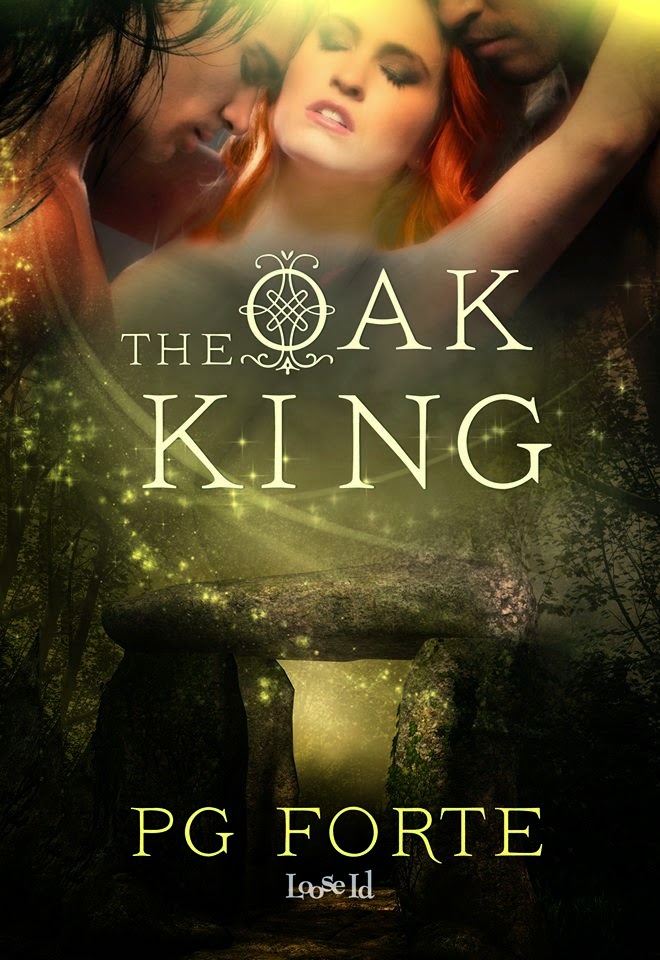 Twice each year, Aine Murphy ventures into the woods to hold ceremonies to honor the Oak King and the Holly King, never dreaming these Lords of the Forest could be anything more than myth. When the legends spring to life in front of her, how can she help but fall for the sexy demi-gods she's loved all her life?
From midwinter to midsummer, Fionn O'Dair rules the Greenworld as the Oak King—a role he feels is beyond his abilities, and one that dooms him to a loveless future, forever craving the one man he can never allow himself to have. How can he resist what Aine offers—the sweet devotion that soothes his aching soul, and the slim chance to live a "normal" life as her husband, if only for half a year?
Holly King Kieran Mac Cuilenn never desired a human lover—until now. Seeing Fionn and Aine together fills him with longing for the love he threw away and awakens feelings he thought he'd buried with the last Oak King. Is there enough magic in the solstice to correct the mistakes he made years ago? Or is he doomed to be forever left out in the cold?

I've been waiting for this book for ages, and I'm so excited it's finally available! Why not join me and Buy It Now?

Loose-Id
Posted by Kate Davies at 6:00 AM No comments:

Taking the Cake was my first published book, released by Samhain in August of 2006. A new cover in 2013 spruced it up nicely. I've got such a soft spot for this story! 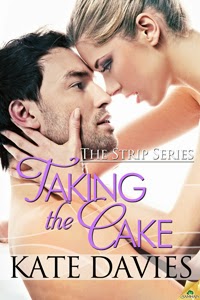 Mollie Mason is sure her night can't get any worse. Stuck in an inflatable rubber cake, she overhears her fiancé slamming her to the entire guest list of his bachelor party - and then she catches him cheating! But discovering that her high school crush has witnessed her humiliation is the icing on the cake.

Cade Gallagher has wanted Mollie for years. And when she asks him to prove to the world - and herself - that she's not just a good girl, he knows he'd be a fool to say no. But she wants just a temporary fling. Will two weeks be enough time to convince her to take a chance on him - forever?

A walk on the wild side with her favorite bad boy is just what this good girl needs! 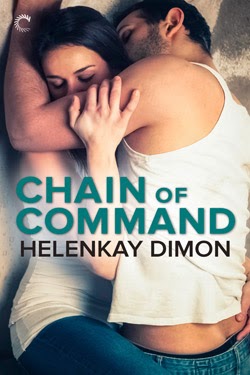 Hey, Helenkay Dimon has a new book - and it's the start of a new series! Check it out below...
Book one of Greenway Range
Retired marine Sawyer Cain can't forget all he's seen and lost, but he can try to start over. Opening a gun range with his closest friends is the first step toward a new life—one where he finally buries the guilt he can't seem to shake. So much depends on the property he needs to buy…and the gorgeous but completely frustrating woman who refuses to sell it.
Hailey Thorne is done—with loss and with anything military, after the closest thing she had to an uncle died in Afghanistan. When Sawyer shows up on her porch he has military written all over him. He's one more in a long line of people who wants the land she inherited, and suddenly he's everywhere she goes. Hailey can't get the broad-shouldered, dirty-talking, dead-serious man out of her head. Or her life.
Sawyer's not above using his skills in the bedroom to try to convince her to sell, and Hailey is more than willing to let him. Their pleasure-only arrangement works…until emotions get in the way. But Sawyer has a secret he's convinced will have Hailey hating him forever, and Hailey's not willing to risk loving anyone she could lose.
~
Sounds awesome, right? Don't you want to run right out and Buy It Now?
Amazon
Barnes and Noble
Posted by Kate Davies at 6:00 AM No comments: