I tried to choose just one TV crush for this post. Really, I did. But in the end, I couldn’t pick one of these two over the other. It was impossible, for several reasons. 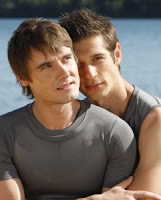 1. The pairing. Dennis and Igor play Roman and Deniz (yes, yes, confusing at first, but you get over it quickly) on the German soap opera Alles Was Zӓhlt. Back in 2007, the characters became a couple, in what was widely considered one of the best pairings (and best coming-out storylines) around. Then, for some reason, Deniz was shoved back in the closet and dated women exclusively on the show. Fans were heartbroken. Even worse, they hardly got a chance to interact, with their storylines going in opposite directions. But last summer, their characters connected again, and they got back together. And, thankfully, the pairing was even stronger than ever.

2. The writing. DeRo 2.0, as the reunion is called in the fandom, was one of the most amazing pieces of TV writing I've ever seen. The writers managed to take two characters who had been badly damaged by the ending of their first romance and made a reunion not just believable but inevitable. The story played out over several months, taking the time to explore the reasons they didn't work out the first time, the growth in both characters, the pain and mistrust they needed to get past, and their new connection based on honesty, maturity, and true love (not just soap-styled lust masquerading as love). Threads from years-old storylines were woven in to make a tapestry that brought everything full circle. It was fabulous.

3. The acting. Since discovering AWZ, I've consistently maintained that Dennis Grabosch is one of the finest actors working today. I have yet to see a false note in any of his performances. They're always honest, subtle, and pitch-perfect. (Note to Hollywood – WHY haven't you snatched this man up yet? He speaks English, too, for heaven's sake!) But Igor's performance during this new reunion storyline absolutely astonished me. He managed to convince even the most diehard Deniz-haters that these two deserved to be together. Over the course of those months, he transformed a character that had previously been written as somewhat shallow and self-involved and made him sympathetic, mature, and a fit partner for Roman. And again, it was the subtlety of the work that stood out. It would have been so easy to project "lovesick" and "despondent" and "ecstatic" with overdone expressions and line readings. Instead, he stuck with the quiet moments that conveyed those same emotions but in a more honest, heartwrenching way.

For Example: Episode 772. This episode really highlights the talent these two actors bring to the table. But pay attention to the last minute and a half. When Roman stops Deniz from leaving, at the bar? The expression on Deniz's face is absolutely perfect for the moment. Not overblown, not "acting", but honest, heartbreaking, and beautiful. 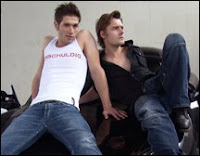 4. The chemistry. Both characters have been paired with others on the show (Deniz more than Roman, which boggles the mind), but their chemistry with other partners is not even close to what they have together. It's off the charts. And that holds true whether their characters are in love, in hate, or in between. Even a glance between them during the Dark Years (yes, another fandom term - the time period after the break up and before they became friends again, let alone partners) was fraught with tension and sparks. It's that little extra something that takes the characters beyond a good pairing and lifts them head and shoulders above.
5. The shallow. Uhm, have you LOOKED at them? Rowr.

So it was impossible to narrow my TV crush down to just one guy. Sorry, Igor and Dennis, you'll just have to share.
For more on Igor, Dennis and AWZ:
Watch Eskimo Kiss Project on You Tube (episode clips subtitled in English)
Visit the RTL website
Dennis Grabosch's website
Igor Dolgatschew's website
Meet them in person at the Gays of our Lives event in NYC, March 26-28!
Posted by Kate Davies at 12:00 AM

Except, y'know, it isn't. I actually burst out laughing when I came over here to read it because literally one minute before that, I was idly thinking "Hmmm, I think it's time for a rewatch of 772" and hey presto - apparently you agree, lol!

No, seriously, I love this. I wish I could be as concise when asked what's so fabulous about these two - I think I'm going to keep this link handy and just pass it around.

And now, TIME FOR A REWATCH OF 772!!! (the photo-gazing scene is my personal angsty crack, but YES YES YES, that final look is just stunning.)

DUDE. YOU POSTED THE CAR SHOT. NOW I WILL BE STARING ALL NIGHT LONG. (I was heading to bed, honest!)

BTW, I agree, it's impossible to separate the two. First it was Dennis all the way for me, but damn Igor for being so adorable. Their chemistry is criminal.

And Dennis Grabosch being one of the finest actors around? SO MUCH WORD. NOT ENOUGH CAPSLOCK AROUND TO AGREE WITH THIS STATEMENT.

(Send me to bed, Kate. It's 4am, can not form coherent thoughts, but it's oh-so-pretty here. Also, thank you for linking 773 and forcing me to watch it again. Because it's embedded, I must press y/y!)

(LOL AND IN CASE ANYONE NEEDED PROOF THAT EKP IS ATTACHED AT THE BRAIN, LOOKIT SHELLY AND MY POSTING TIMES WHEN WE WERE ACTUALLY NOT SITTING GLEEFULLY IN A CHATROOM PLANNING THIS AND HAD NO IDEA THE OTHER ONE WAS READING AT THE SAME TIME. BWAHAHAHAHAHAHAH.)

[Sorry. The capslock of mad amusement is entirely necessary.]

Right. Next time someone asks me "What were you doing in New York again?" I'll send them to your blog. *copies link*
YES, YES and YES!!! And YES and YES! Completely.

And you just cost me another 10 minutes I should have spent working because it was IMPOSSIBLE not to click on the embedded clip. There are evil mind controlling powers at work here.

Seriously Kate, no one will be able to resist the powers of this German soap after reading this post!

Yay! So glad you guys liked it!

Aldi - Concise? HAHAHAHAHA! I love that this epic post is considered concise. Though I suppose next to your 10K character eval, it is. *loves*

And yes, you already know how much I love the photogazing scene. Sigh.

Shellydkitty - Sorry to be contributing to your lack of sleep! But yes, it's impossible to separate the two. I even considered doing two posts - one on Dennis, one on Igor - but couldn't figure out how to write it.


WildePet - Do you know how long it took me to write and post this, just due to the mind controlling powers of 772? It's insidious, I tell you.

Yes, I'm another who can't see a link to 772 either without clicking. It's my drug: hurt and comfort distilled into one concentrated dose. And I think you're absolutely right about the control in the ending. After all the struggle it's truly Deniz's moment and Igor portrays that so beautifully.

Thank you for such a perfect description of why DeRo rocks!!!

Don't you just love Deniz' face in that split second between Roman stopping him, and realizing that Roman wants to be with him.
*pinches his cheeks*
Oh your totes right. This is the episode that marks the moment they became inseparable.
If you had done 771 you might have been able to choose, but luckily, this wasn't he case :)

Lilith - 772 really does encapsulate everything that rocked about the DeRo 2.0 reunion storyline, didn't it? Amazing stuff. Glad you liked the post!

Notoriouslyunique - There were moments during the reunion that my loyalties swayed one way or the other, but overall, they're just so perfectly balanced I don't think I could make a permanent choice.

Couldn't agree with you more on all your reasons for your TV Crush :)
I can't get enough of these guys, like you said, they have great chemistry and they are verra easy on the eye!
Rewatched epi 772 too - it is really a good example of their acting skills. I loved this episode because of the heartwrenching acting!
Thank you for this post & thanks again for introducing me to DeRo a few months ago! :D
hugs,
Janna

How do I love your brain darling!

You've explained it all so perfectly - I'll just put you in page 1 of my fangirl bible. These two just kill me every time; it's art - just art!

But you are evil, tempting us with 772!...argh okay I approve entirely of your evil brilliance.

Janna - Thanks so much for stopping by - and posting! Yes, there are so many reasons to love DeRo, aren't there?

And you're more than welcome. I'm always thrilled to introduce people to this pair!

The only thing I wish I could change about this post is the title. It's supposed to be Kate's CURRENT TV Crush, not NEW. One, because that's the title I've been using for the semi-regular series of posts, and two, because my love for DeRo certainly isn't new! :)

Spaghettitoes - Page One? I've arrived! :) And it's always nice to put my "evil brilliance" to good use. LOL

Now where the hell are you?! ::searches IM frantically for Kate::

And where the hell's today's ep?! ::searches frantically for EKP's brilliantly clipped and translated vid::

::wanders off looking manic and wild-eyed::

How weirdly wonderful is it that our fricken' blogs look identical?

And that Dennis w/cigarette is my screen saver.

Maia! Hang on, I'll be back soon. RL is taking center stage for a moment. But the video is up now!

Lisabea - how cool is that? We must have been separated at birth. Or something. Thanks for stopping by! ;)

isn't it just fabulous? like, everything about it&them? sorry, week sucked my brain out, but i'm a happy fangirl. lookit, badge to prove it. shiny..
oh yeah,thumbs up kate!everything you said!