This, That and the Other...

On the good news front: The Devil Inside is now available on Kindle! I've been waiting for this to happen since January, so I'm thrilled it's finally up. Go forth and check out the sample, Kindle-folk! :)

And congrats to Maia, who won the free book draw last week. E-mail me off-blog for the selection list!
Posted by Kate Davies at 8:35 PM 1 comment:

Holy smokes, has it really been that long since I posted?

Two conferences in one week does that to a person, I suppose. Finally, though, my big presentation at work is done and I can spend a little more time here.

Just for fun, I thought I'd post a short excerpt from Ritual Love, just because I'm in the mood for a time travel. :) Then, anyone who comments between now and Monday morning will be entered for a chance to win one of the books I brought back from the Rose City Romance Readers' Luncheon. Your choice!

Have a great weekend. And enjoy!

Her jaw dropped. “What?”

“‘Tis the time when the veil between the worlds of the living and the dead is lifted. And if the dead can walk among the living, why could a living soul not travel across time, as well?” He shoved a hand through his hair. “It explains much. Yer strange clothing, yer words, yer mannerisms.”

“Setting aside the fact that I could say the same thing about you, it’s impossible.”

“Are ye so blinded to the world beyond yer ken, ye canna consider the possibility?”

“Of course I canna—can’t—consider it. I’m a scientist, for God’s sake!”

“And what would that be?”

Moira blew out a frustrated breath. “Someone who believes in facts and reality, who researches and predicts and accepts the natural world as it is, not someone who indulges in fantasy or wishful thinking.”

“And ye know all of the world as it is?”

He raised an eyebrow. “Can ye devise another explanation?”

“But ye are unwilling to consider this explanation, at least for tonight.”

She crossed her arms over her chest. “Fine. Explain it.”

“Gladly.” Aedan stretched his legs out in front of him. “First, ye are right ignorant of life today.”

He lifted a hand. “Not to say ye are a fool, just—unschooled.”

“Ye know naught about Columba, nor the struggle between his people and ours. Ye talk of things I know nothing about. Ye believe me to be something I am not, and I know naught of what you are.”

“How do I know you aren’t just pretending?”

He leaned toward her until their faces were mere inches apart. “I dinna lie, and I dinna pretend. Can you say the same?”

His expression darkened. “Then I dinna understand why ye keep denying the truth, and yet call me the liar.”

She glared at him. “Okay, not a liar, but not grounded in reality, either.”

“I deny reality? You think I’ve traveled fifteen centuries back in time!”

“And why could this not happen?”

“Because the only way that it could happen is magic, and magic doesn’t exist!”

He regarded her with something uncomfortably close to pity. “It must be a sad, empty time ye live in.”

She opened her mouth, but clamped it shut again. How could she argue with him when she’d come to Iona because of that very reason? Once Gran was gone from her life, the magic had disappeared, too.

It didn’t mean she believed his fairy-tale explanation for what had happened tonight. But he was right.

Her life was sad. And empty. But she couldn’t bring herself to tell him so.

Instead, she closed her eyes. At least she didn’t have to look at his too-perceptive, too-attractive face.

Why did he have to be so gorgeous, when he’d obviously been dropped on his head as a child?

Because face it, the man was about as close to perfection as she’d ever seen. She squinted one eye open, inspecting him surreptitiously in the dimness of the cave. His light brown hair was just past shoulder-length, tied back with a leather thong at the base of his neck. Rich brown eyes, the color of bittersweet chocolate, gazed out at the darkness beyond the cave. A fierce strength suffused his face, reminding her of a bird of prey.

The rest of him was just as impressive. A bronze torc circled his neck. Broad, strong shoulders strained against the rough woolen cape fastened across his chest. Underneath, he wore a tunic of the same indeterminate color over leggings that hugged his powerful thighs.

Her gaze flew upwards in time to see the smug look on his face. “I wasn’t…” But of course, she had been, so she just clamped her mouth shut and glared at him.

In response, he laughed softly and settled back against the wall of the cave opposite her, his long, muscular legs pressing against hers. Moira tried to shift, but in the cramped confines of the cave she didn’t have anywhere to move. Instead, the friction of their legs rubbing against each other sent an unwelcome shock of sexual awareness through her.

No, dammit. She did not want this man.

Well, she didn’t want to want him, anyway.

“We have many hours until the dawning,” he said. “Ye may sleep if ye wish.”

Yeah, right. The last thing she wanted to do was fall asleep with a man who’d kidnapped her.

He shook his head. “Ye are a stubborn one, aren’t ye?”

“Me?” She threw up her hands, which she’d forgotten were tied together until they smacked her in the forehead. Swearing, she let them drop back into her lap.

Immediately, Aedan was up and at her side. “Are ye hurt, lass?” He ran his fingertips over her forehead, searching for a bruise or lump. “That was quite a wallop.”

“Stop,” she insisted, but it came out as more of a plea than a command. The breathless quality of her voice made her blush.

His hand stilled, and he looked into her eyes. She could see his Adam’s apple bob. “If it is what you wish,” he said, withdrawing his hand slowly.

As soon as his touch was gone, Moira was struck with a pang of regret.

Maybe she was the one who had been dropped on the head as a child.

“I do regret the need to bind ye.” He crossed his arms over his chest as if to keep himself from touching her again.

She held his gaze as she lifted her arms, holding her wrists out in mute appeal.

“What do you think I’m going to do? Fly out of here?” She dropped them back into her lap with a huff of frustration. “God, you are the most stubborn, pigheaded, obnoxious…”

“High praise indeed, from ye.” He quirked a brow. “For I am sure that you are familiar with those qualities in yerself.”

“Is that some fancy way of saying ‘it takes one to know one’?” She rolled her eyes. “I don’t know why I even bother.”

There was a long silence. Then Aedan said softly, “Perhaps because talking makes the hours of
darkness easier to bear.”

A shiver danced down her spine. Hadn’t Gran said almost the same thing more times than she could count, when nightmares drove Moira from her bed? They’d sat at the scarred wooden table in the farmhouse kitchen, drinking hot chocolate and talking.

“What is it, lass?” He leaned forward and placed a hand on her knee. “Is something disturbing ye?”

“I’m fine.” She shifted, dislodging his hand, and he pulled back. She wasn’t about to tell him how his touch sparked a flame that traveled through her entire body.

Was it some kind of sexual Stockholm syndrome, or what? And why, dear Lord, why did it have to happen to her?

“I’m fine,” she said again. “In fact, I’m a little tired.” She faked a huge yawn that mostly served to prove to herself that she never would have made it as an actress. “Good night.”

Then she scooted as far away from him as possible, given the confines of the cave, and rolled over to pretend to sleep. 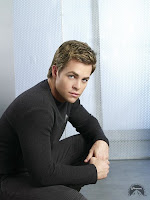 I must have a thing for military rankings.
Why else would I follow up my recent post on Captain Jack Harkness with a post on yet another Captain crush?
I'm speaking, of course, of Captain James T. Kirk.
I saw Star Trek on Saturday and still can't stop blathering on about it. Simply put, it was fabulous. Fun, exciting, can't-wipe-the-smile-off-your-face pure moviemaking. If you haven't seen it yet, GO.
Part and parcel of that enjoyment was the portrayal of Captain Kirk by Chris Pine. By turns brash, hotheaded, wounded, sexy, and delightful, he brought a sense of fun and enthusiasm to the character that added immeasurably to the experience. There's one particular scene -- after he first arrives on the Enterprise -- that almost had me falling out of my seat, I was laughing so hard.
Plus, he's damn cute.
So there you go. My third Captain crush, Captain Jim Kirk. (For those keeping score at home, Captain Jack Sparrow was the first, though I didn't blog about him at the time.) Huh -- two Captain Jacks and a Captain Jim. What are the odds?
Discussion question -- have you seen the new Star Trek movie? If so, who caught your eye? What did you think?

If you're a romance reader (and it's likely, given that you're visiting a romance author's blog), you know the drill. You see a headline in the paper or online, or hear a teaser for a news segment on TV, that refers to romance. You're optimistic -- you read romance, after all! -- but inside, you're cringing just a little. How soon before someone references bodice rippers? What condescending, snarky aside will be tossed in first?

That's why it was so refreshing to read this article on Huffington Post about the Princeton romance symposium. Author Joanne Rendell really cuts to the heart of the genre, with nary a condescension in sight. Brava, Ms. Rendell!

So, are there others out there? Have you found a news article or segment that portrays romance in a positive light? Share it in the comments!
Posted by Kate Davies at 11:40 PM No comments: