So this weekend I took the kids to see Glee 3D, which we'd talked about seeing when it came out but were either gone or busy for most of that first week. Of course, now it's pretty much gone from theaters, so we had to drive an hour to one of only three theaters in a 100 mile radius to still be showing it.

(But honestly, I think the movie would have been just as enjoyable - maybe more - if it had been regular 2D style.)

Overall, we enjoyed the film, though the kids wanted to know why the Klaine skit was barely shown, and midkid joked that it was too bad Blaine had no furniture to climb on.

We all agreed that since the concert series never made it to our neck of the woods, this was a worthy fill-in.

Posted by Kate Davies at 9:39 PM No comments:

Book BIN Tuesday - It's Always Been You

Victoria Dahl has a new historical out!
Once She Slipped Through His Fingers. . .

Aidan York has spent ten years mourning the woman he once loved and lost. He's filled the void in the only way he knows—by distracting himself with wild behavior and scandalous trysts. It's a hollow existence, but it dulls the pain. Until the day he encounters a ghost: the woman he thought drowned at sea, alive and as enchanting as ever. . .

When Kate Hamilton sees the man she once hoped to spend her life with, she is hit with a storm of memories and longing. But though resisting Aidan's passion proves impossible, Kate must try not to love him all over again. For her seemingly quiet London life shields a dangerous secret, one that will catch up to her the moment she lets herself fall. . .

****
Sounds deliciously angsty, doesn't it? Why not take a chance and Buy It Now?
Posted by Kate Davies at 12:21 AM No comments:

I swear, the summer months have me all confuzzled. I missed my guest blog day on International Heat, which bums me out, since there were some good comments that were left hanging, but never fear! I've dropped by and am hanging out there now. If you are curious about my tips on getting naughty, take a peek here.

Also, blogmate Kinsey Holley has a new book out as of today, and I missed featuring it! So here are the deets - go check it out! 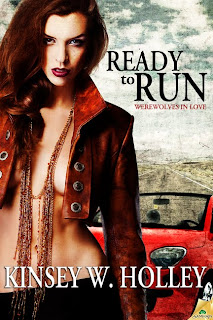 Sometimes a girl’s gotta save herself.

A Werewolves in Love story.

Sara Hedges had planned to escape the backwater, bigoted town of Luxor, Texas on the wings of a college degree—not on the back of a Harley, riding for her life.

Just a couple months shy of loading up her Miata, however, betrayal bares its ugly fangs. Her scumbag uncle has sold her to a pack of werewolves willing to pay any price for her special bloodline and it looks like there’s no way out. She never expected the new-in-town, sex-on-a-stick loner to come riding to her rescue. Or to discover he’s a werewolf, too. A good one...with one too many secrets.

Bryan Keeton waited two months deep undercover for the chance to get his hands on one of the gangster Eurowolves wreaking havoc across the South. After calling in the FBI to blow the lid off Luxor, he’d planned to leave town before he did something he might regret—like get involved with the suspect’s niece.

Have a Question for Kate?

I've just agreed to do a guest blog post, which will go up next month. One of the options is an interview format, where I can pick questions to answer about writing, life, whatever I want.

But I stink at coming up with questions, so I'm opening it up to you first - what do you want to know about me? Post your questions in the comments, and I'll grab a few for the interview!

And on a completely unrelated note, I've signed up for Kindlegraph, a cool new service that provides autographs for your Kindle titles. (No, I won't be writing on your screen with a sharpie.) It's free, so if you've ever wanted a signed Kindle ebook cover for one of my titles, head on over here to request one.

Another unrelated note! (I seem to have a surplus of them today, LOL) Last week, the German TV production company RTL started enforcing its copyright claim, which resulted in the closure of some YouTube channels which had been translating, subtitling, and posting clips of its shows for an international audience. One of the main shows was Alles Was Zaehlt, the German soap I watched for a couple of years via YouTube (since I don't speak German). That first channel, EskimoKissProject, was spared the purge, on request of one of the actors. He's asked that they be allowed to translate and post his final story arc on the show, as it was their translation and subtitling work that first brought him (and the show) an international audience.
They're being given the chance to do just that, but once the story arc has ended, so will their channel, along with all the videos (hundreds of them!) that they've created over the years. If you haven't been introduced to Roman and Deniz, I'd recommend you take a peek now before it's too late. http://eskimokissproject.wordpress.com/2011/08/04/867/
As for the final story arc, well, let's just say there are spoilers out there for those who want to know, and they aren't too hard to find. :)
Posted by Kate Davies at 12:01 AM 2 comments: 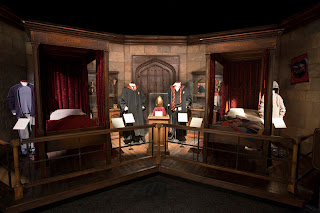 So, I finally got to see the last Harry Potter movie, and loved, loved, loved it! I thought the acting was superb, the cinematography excellent, and the entire experience moving and enjoyable.
I also saw it in glorious 2-D, since 3-D glasses give me a massive headache. Luckily, my kids are indifferent to the 2-vs-3 D debate, and were just happy to see the movie while it was still in theaters. (We're still in hot water for missing Pirates of the Caribbean 4, despite the negative reviews. They didn't care that the movie was likely horrible - they wanted to see it on the big screen!)
Next movie up? The Glee movie, most likely, since FutureStar and Midkid both love the music.
What's next on your list?
Posted by Kate Davies at 1:00 AM 1 comment: