It's almost Halloween, and I've got a treat for you - a time travel Halloween-set romance novella! You can pick up a copy of Hallowed Love for just $1.99. And just take a look at this gorgeous cover! 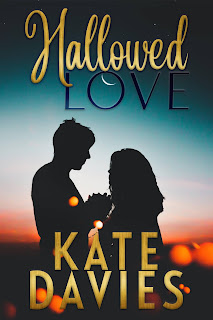 Here's where you can find it:

A lost woman. A hunted man. On a night of forbidden rituals, the veil between past and present lifts—and their worlds will never be the same. Scientist Moira Sinclair doesn't believe in magic. Or at least she hasn't since childhood. She's only come to Iona in remembrance of her long-deceased grandmother—the last person who encouraged her fanciful side. But now she's stumbled onto a secret druid ritual—and into another time. Aedan Ap Crannog is furious to discover an outsider spying on their sacred, banned Samhain rites. With her strange garb and stranger mannerisms, Moira is unlike any woman he's ever known. But she could cause trouble for him and the people who follow him in the ancient ways. To prevent her from sounding the alarm, he takes her captive, hiding her in the labyrinth of caves along the far shore. Despite their differences, sparks burn between them as brightly as the Samhain bonfire. Now captive and captor must find a way to bridge the centuries before the magic disappears with the dawn...

Posted by Kate Davies at 8:11 PM No comments: